Mixing tuna with dog food is there a benefit?

Tuna fish can have some benefits for dogs and mixing tuna with dog food can be a great way of getting your dog to eat this nutritional extra.

Dogs enjoy some variety in their diet and adding tuna fish to his diet is a great way of introducing omega 3 oils and other vitamins and minerals to your dog.

Most dogs love tuna and if your dog is a fussy eater then adding tuna to his meal will often encourage him and many dogs that turn their noses up at dog food will happily scoff it down when it is mixed with fish.

It is perfectly safe to feed tuna fish to your dog, whether canned or fresh.

If you choose to feed your dog canned tuna fish mixed with his food, then you need to make sure that the tuna is in water or brine and never oil.

Oil, even olive oil, can upset your dog’s tummy is he eats it in large amounts and, because it is a source of fat, there is a really good chance that he will gain weight.

Inside of a Dog
One of the best books ever written that takes you into a dog's mind and helps you to understand how your dog sees the world. A must for any dog owner.
£9.55
Buy on eBay View on Amazon

Tuna in oil can also have detrimental effects on other parts of your dog’s health such as on his heart and other organs.

So always use canned tuna in water or brine.

Can I feed tuna to my dog everyday?

Yes, your dog can eat tuna fish everyday but you should avoid feeding it to him daily even if he loves it ( as most dogs do ).

Tuna are long life fish and, like all fish, they pick up pollutants in the form of heavy metals from the ocean.

Due to their long lives, tuna fish can have levels of mercury in their bodies, which can present problems if the fish is eaten daily.

Humans have to be wary of consuming too much tuna because of this and the same applies to dogs.

This doesn’t mean that it is dangerous to feed tuna to a dog, it just means that it should be an occasional treat, rather than a regular meal.

Also never feed tuna fish that has onions or garlic added to it as both of these a dangerous to dogs and could make him ill.

Can I mix tuna and mayo into my dog's food?

It’s not really recommended. Although it won’t do your dog any harm in small amounts, mayonnaise is high in fat and, if you feed it to your dog then he is at risk of weight gain and related illnesses.

There’s no need to add mayo to tuna for your dog. Feed the tuna plain without anything added to it.

Dog’s love tuna fish as is and there is no point in adding anything to it, even mayo.

What's the best tuna to mix with dog food?

As well as canned tuna that is in water, there are different types of tuna fish and the ways in which they have been caught differ too.

The best thing to look for is tuna that has been ‘pole and line caught’ – this means that the fish were caught one at a time, by line, as opposed to being captured in nets along with lots of other different fish and wildlife.

You can also look for certifications on the can, the presence of which will show that the fish have been farmed responsibly and carefully.

There are different types of tuna fish that you can feed to your dog with his dog food and no-one type is really any better then the other.

All are great for your dog.

How to mix tuna with dog food

I find that the easiest way to do this is to firstly put some of my dog’s biscuits into his bowl and then just tip the contents of the can of tuna on top.

Using a fork I then mash it in, making sure as many of the biscuits are covered in the ‘fishy juice’.

It’s a good idea to put a few less biscuits in the dish than normal, or less of the usual food that you use.

The tuna will add some bulk, fats and nutrients so you’ll need to reduce levels of his normal food to stop him from putting weight on.

What about raw tuna, can I add raw tuna fish to my dog's food?

Technically the answer to this is yes, you can feed raw fish to your dog.

However, many people do not recommend that you do and that you should cook the fish first before using it as dog food.

Fish can contain parasites and can be sources of bacteria such as salmonella which can make your dog, and you, unwell.

The fish should always be fresh and you should take the same care with it as you would if you were preparing it for yourself.

You should cook it, without any seasoning, let it cool and then break it into your dog’s food for him.

Always make sure that you have removed as many bones as possible, or mash the tuna up to crush them into the meal.

Can I give my dog tuna pasta?

You can give your dog tuna with pasta and you can mix small amounts into his food as well.

Pasta is fattening, and if you give your dog too much then he’ll gain weight quickly.

If you do mix tuna pasta into your dog’s food then try to remove as much cheese from the pasta as you can and reduce the amount of dog food that you use.

Last year one of my spaniels was very unwell with Giardia, which he had picked up from the beach.

He was off his food and lethargic.

Our vet suggested a diet of tuna fish mixed up with mashed potato – something that I’d never considered or heard of.

We gave it a try and Boris ( the spaniel ) wolfed it down. We fed this in small amounts for a few days and, as he recovered with his medicine, he was gradually able to eat more tuna and potato andhe quickly recovered.

It might be an option for you if your dog is unwell. A small amount of boiled potato mashed in with a can of tuna in water ( don’t add anything else ).

It works for our dogs and might help you in the future.

5 dog foods with fish that we recommend 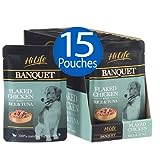 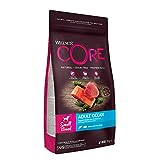 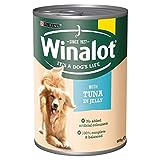 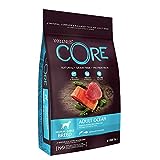 Dogs love tuna fish and mixing tuna with dog food is a great way to introduce your dog to tuna.

Ideal for fussy eaters and dogs that are unwell, tuna fish can be a good addition to your dog’s diet if you follow the basics of not feeding too much too often, and, if you use tinned tuna, getting tuna in water or brine and never oil.

What is the fastest dog? The results may surprise you

Most dogs can run at incredibly fast speeds. As anyone that has ever tried to catch an escaping puppy or older dog can tell you, even the smallest of dogs can truly speed off, with all four legs spinning like fast cogs. But, what is the fastest dog? There are two dog breeds that compete […]

What do dogs love to eat? Foods that are irresistible to dogs.

What do dogs love to eat? Foods that are irresistible to dogs. Anyone that lives with dogs will know that they are constantly on the lookout for food, scraps, treats and literally anything that they can get hold of to eat. Dogs seem to love human foods and will sit and beg at mealtimes and […]

Should I crate my dog in the car?

Should I crate my dog in the car? When you are travelling with your dog in the car you need to make sure that he is safe and secure. If you had an accident then your dog could be hurt or, he could hit you, causing injury. You should always do your best to ensure […]